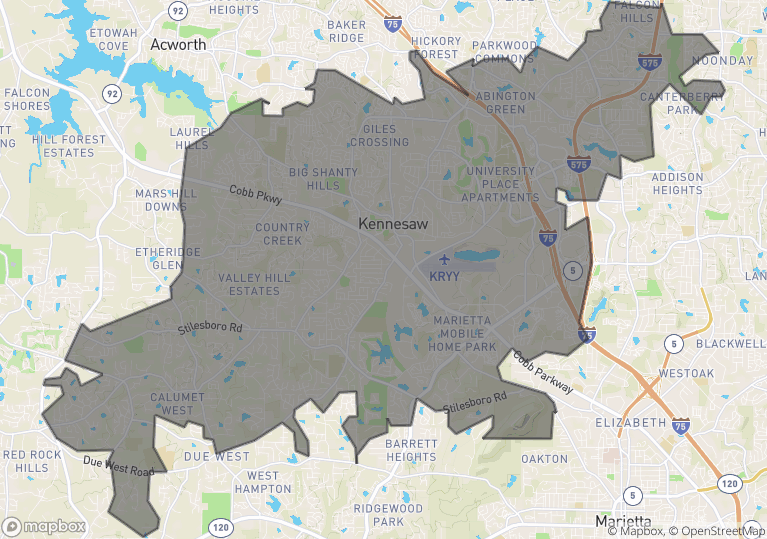 A quick view of the most influential metrics in Kennesaw.

Abundant with locomotive and civil war history, Kennesaw, Georgia is located in northwestern Cobb County, and bordered by the city of Acworth. This town has been featured in several publications and articles as one of the “10 best towns for families” to reside. Kennesaw is named after Kennesaw Mountain, the highest point in the Atlanta metro area. Kennesaw Mountain’s elevation is 1,808 feet above sea level. Kennesaw Mountain National Battlefield Park is a national historic site that is 18 miles of nature trails and the location of several historic Civil War battles. The park is a perfect place for the family to enjoy with combat reenactments in front of the mountain, hiking trails, and exercise group meet-ups. Kennesaw is full of locomotive history and has a train museum as well as a Civil War Museum.
Kennesaw city regulations require the use of 19th-century brick architecture, including lampposts and benches in this Civil War-era town. The population of Kennesaw has tripled since 1980 and after the last census is estimated at approximately 30,000; yet, the town still has a large sense of community. Kennesaw is located within the Cobb County School District and features several top-rated schools in the state of Georgia. In fact, the Cobb Chamber of Commerce pays for SAT prep courses for hundreds of high school juniors throughout the district.
Kennesaw features several large shopping centers including Town Center Mall, the Avenue at West Cobb, and is located just minutes from The Outlet Shoppes of Atlanta in Woodstock, Georgia. Your family will never run out of new places to eat, as Kennesaw is centrally located to the best spots in Cobb County. Local parks for families to enjoy are endless! Swift Cantrell Park features a dog park, several miles of walking trails, a state of the art skate park, and playgrounds. Adams Park and the Marietta Square are central to the town as well. Kennesaw State University is within the city limits and has become one of Georgia’s fastest growing universities and recently joined forces with another local college, Southern Poly Tech.
Contact me to today so we can discuss making Kennesaw, Georgia your new home!

View our selection of available properties in the Kennesaw area.

Check out the latest demographic information available for Kennesaw.

Learn more about schools near Kennesaw complete with ratings and contact information.

The Best in Kennesaw

Browse through the top rated businesses in the most popular categories Kennesaw has to offer.