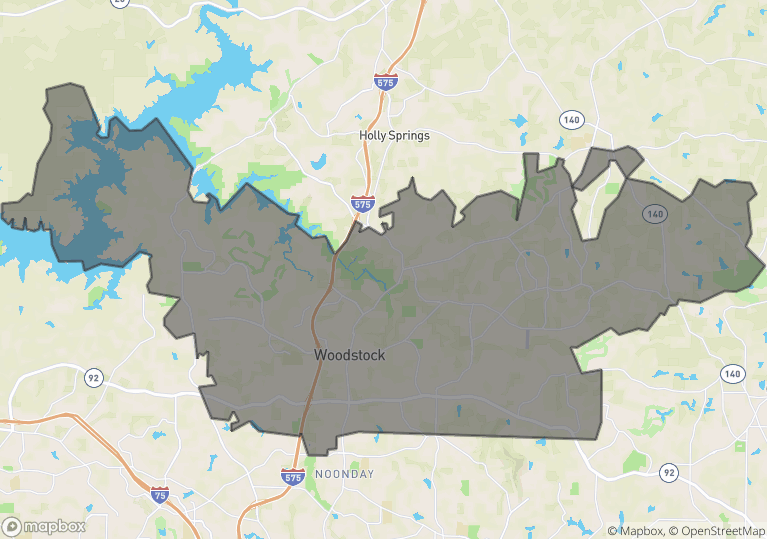 A quick view of the most influential metrics in Woodstock.

Located in southern Cherokee County, Woodstock, Georgia is 30 miles north of Downtown Atlanta. The city is over 100 years old and is one of the county’s oldest towns but currently holds the title for the fastest growing city out of Cherokee County. The growth rate for the city was projected at 70% over the past 10 years and has nearly doubled in size during that time. Woodstock is located along Interstate 575 and Highway 92, a perfect location for access to anywhere in Metro Atlanta.
Woodstock features several family friendly spots and attractions, including Downtown Woodstock and Towne Lake. Towne Lake is a planned community that began in the 1980’s as an upscale residential enclave and has recently seen a commercial economic boost. The name Towne Lake comes from the areas proximity to the town of Woodstock and Lake Allatoona. Towne Lake is known for its sprawling subdivisions, two Golf Courses and the largest recreational park in Cherokee County, Hobgood Park.
Downtown Woodstock has recently turned an economic corner. In 2009 a committee was formed to revive Main Street along Downtown Woodstock and help the city recover from economic downturn. Since this time, Downtown Woodstock has seen economic growth and remained resilient provided by community support and City Council tax rate increases to fund the Main Street Program. Today, Downtown Woodstock is a local attraction for families, singles, and retirees. On the second Friday Night during each Month, Downtown Woodstock holds “Friday Night Live” where there are concerts, movies, and other attractions on the lawn to attend. Downtown Woodstock is rich with history and has some of the most unique boutiques and restaurants in the city. There is also a Farmers Market in Downtown Woodstock every Saturday morning and Tuesday evening year round.
Woodstock recently had a large outlet mall open within the city limits. The Outlet Shoppes of Atlanta is located off of exit 9 on Interstate 575 and is a shoppers dream! Stores like Coach, Saks Fifth Avenue, Nike, and Michael Kors call the Outlet Shoppes of Atlanta home.
Contact me today to call Woodstock, Georgia your new home!

View our selection of available properties in the Woodstock area.

Check out the latest demographic information available for Woodstock.

Learn more about schools near Woodstock complete with ratings and contact information.

The Best in Woodstock

Browse through the top rated businesses in the most popular categories Woodstock has to offer.